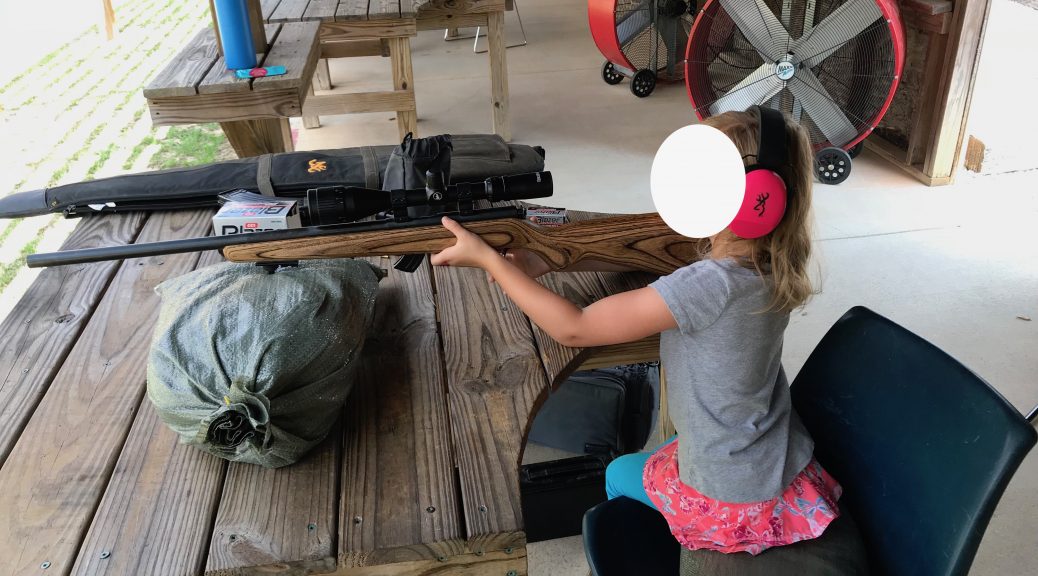 So you’ve decided that you would like to start teaching your kids about safe firearm handling, but you’re not sure about the proper way to do it.  As somebody who just recently started teaching his daughter (4 years old) to shoot, I’ve done a lot of research on the subject. In this post I will summarize everything I have learned, both from my research and my personal experiences.

How Young is Too Young?

Before we start discussing how to introduce children to firearms, we first need to discuss what age to start.  Realistically, age probably isn’t the best metric to use in order to determine if a child is ready. I have had friends tell me that their kids weren’t ready to learn until 8 years old, whereas my daughter was ready to learn at 4.  Keep in mind that when I say “ready to learn”, I do not mean that they just have a desire to learn. The child has to show a certain level of maturity and understanding of consequences prior to being deemed ready to learn to shoot.

In order to determine if your child is ready, I would suggest the following:

Obviously, these questions are subjective.  Just use your best judgement. Also look for red flags that might show that your kid isn’t responsible enough to learn to shoot.  For example, if you have shown your kid how to use a knife, observe how they use it. If you observe unsafe behavior with the knife, or your child doesn’t respond to your warning about safety, then your child probably isn’t ready to learn to shoot.

OK, so you’ve decided that your kid is ready to learn to shoot.  What next?

If you think that your child is ready to learn, I would suggest starting with 1 rule.  When my daughter first started showing interest at 3 years old, I told her rule number 1.  She would come into the backyard with me when I would go out to shoot my longbow, and I would randomly ask her “what’s the first rule of firearm safety?”  Once she could easily remember rule 1, I added rule 2. And so on.

If your kid is older (perhaps around 5 or 6), you might be able to get away with teaching them all of the rules at once.  However, if they are very young then going 1 rule at a time is a good idea. However, they can’t just memorize the rule. You need to make sure that they understand what it means.

For example, when I would take my daughter out back to shoot the longbow, I would sometimes test her. I would un-nock the arrow, but keep it on the shelf. I would then rotate so that I wasn’t aiming at the target.  Instead, the arrow was pointed toward our dog (or a window, or anything else that you don’t want to “destroy”). I would then ask my daughter if she thought I was doing anything wrong. Initially, she didn’t understand.  So I would walk her through it by asking where the arrow was pointed. After she answered, I ask her if that is something we want to destroy. Eventually, she would call me out for breaking the first rule whenever she saw me do it.

Rule 2 is harder to test for, unless you take your kid to the shooting range (or any other place where you can shoot).  However, rule 3 is fairly easy. You basically follow the steps in the previous paragraph related to rule 1. But instead of asking if you want to destroy what you are aiming at, ask if there is anything behind the target to stop the arrow if you miss.  If your child is at all like mine, they will probably pick up the rules pretty quickly.

What Should be the First Firearm?

Alright, so your child is ready to learn to shoot and understands the rules of firearm safety.  That’s great, but what weapon should they start with? I think this question is very individual.  If you primarily shoot shotguns, then start your kid with a shotgun. I primarily shoot longbows and rifles, so that is what I started my daughter with.  I would advise against having their first firearm be a handgun, since more recoil is felt with handguns. However, I’ll give some advice for handguns, as well as shotguns and rifles.

Side note: If your kid wants to learn longbows, you can easily make a very cheap longbow out of red oak.

If your child is going to start with handguns, make sure you pick a handgun that properly fits the child’s hands.  You don’t want to start a 4 year old with a full sized 1911. Some other important features of their first firearm are:

I won’t make any recommendations of specific handguns, since I have yet to introduce handguns to my kids.

As with the handgun, I would suggest starting your kid with a .22 Long Rifle.  For one thing, .22LR ammo is incredibly cheap. The more rounds your kids can get down range, the better.  In addition to caliber, you have decide what type of rifle you want. When I chose a rifle for my daughter, the 2 main types of rifles I had to choose between was a single shot rifle or a semi-automatic.

I chose to go with a single shot for two reasons.  First, it is more safe. If your kid gets very excited (as most kids do), they might jump up after their first shot and yell something along the lines of “that was awesome!”  If the kid is still holding the rifle, they could easily turn, point the trigger at something they shouldn’t, and pull the trigger again. For a single shot rifle, that would just be a mistake, instead of being a catastrophic mistake.  On the other hand, a semi-automatic rifle would provide more longevity. Your child is more likely to get bored shooting a single shot than a semi-automatic.

For reference, the first rifle I purchased for my daughter was the Savage Rascal.  I refused to purchase the rifle in pink, even though it was offered.  I made this choice because I didn’t want my daughter thinking of the rifle as a toy.

First, a confession.  I have never shot a shotgun.  So take my recommendations with a grain of salt.  The information that I am giving here is purely based on my research.  A good gauge to start with is the .410. It has the least recoil, and generally the smallest shotguns are .410 gauge.  I have heard that kids will outgrow the .410 quickly though, and some suggest getting them a 20 gauge. Your choice might depend on your child’s age at the time.

A Final Note on Firearm Choice

One final note, and this if VERY important.  The firearm needs to stay locked in your gun safe.  Your child should also not have the ability to gain entry to the safe.  This guarantees that the firearm is only used under your supervision.

Ok, your child has their first firearm.  But, depending on the age of the child, there might be a problem.  I realized that my daughter was not quite at an age where she could understand how to use iron sights.  The Savage Rascal that I bought my daughter came equipped with peep sight.  She couldn’t figure out how to aim the rifle at the target.  I have a good method of teaching kids to use iron sights, but that will have to be a future post.  If your child is old enough to use iron sights, that is a good way to start.

Since my daughter couldn’t use the peep sights, I decided that some sort of scope was necessary.  The choice then became a reflex sight, or a scope. The first time I took my daughter shooting, I let her shoot my .22 rifle.  It has a 3-9×40 scope attached, and she had some problems with the eye relief.  She was able to see through the scope, but it took a bit of effort to get her lined up properly.  I chose to go with a reflex sight, because of the unlimited eye relief.   The reflex sight I went with is shown below (not that it is an affiliate link).

What Age to Start Cleaning

I don’t have many suggestions as for when to have your kid start cleaning their firearm.  All I will say is that my daughter likes to help me clean the rifles, but isn’t yet old enough to clean her rifle herself.  But you should instill in your child that the firearm should be cleaned after every time you shoot it.